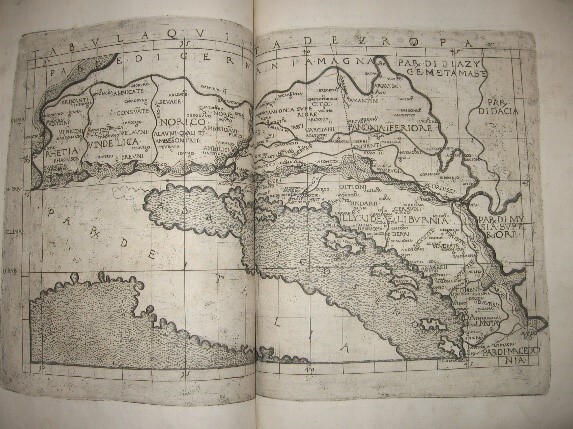 The oldest book in the Library is Ptolemy's  Geographia di Francesco Berlinghieri Florentine published in Florence by Nicolo Todescho ca 1480. This folio volume with 31 maps engraved on copper and is considered a monument of typography and the engraver's art. This edition is the first to contains the 27 high quality modern world maps, updated from the ancient maps, and, in addition, four new modern maps of Gallia Novella (France) Hispania Novella (Spain), Novella Italia (Italy) and Palestrina Moderna (Palestine).

Ptolemy was a mathematician and astronomer and applied these skills to map making. He based the projections of the world on the world’s circumference being18, 000 miles (28,800 kilometers) and developed a grid system based of latitude and longitude devised by Marinus of Tyre. Within this framework Ptolemy was able to establish the coordinates and in his major work Geographica he listed over 8,000 places and their respective coordinates. These were given the coordinates down to the degree, minute, second division used today.

Ptolemy’s maps are of a rectangular conception, with meridians and parallels intersecting at right angles.

This was printed using metal plates, which was at that time a pioneering work started in Italy, about 30 years after moveable typesetting was introduced by Johannes Gutenberg.  Ptolemy is known as the father of geography for his work on mapping the globe. He completely missed the inverted triangular shape of India, and made Sri Lankan (which he called Taprobana) a vast island, nearly as big as France and Spain together. The Indian Ocean is displayed as a land locked ocean. These errors show how cartography, recording exploration, was still in its infancy. The New World was not depicted in the Ptolemaic Charts until 1507.

Francesco Berlinghieri (1440-1501) was an Italian humanist, scholar and poet who contributed to the Renaissance by promoting the value of classical Greek learning and was one of the first to print a text based on Ptolemy's Geographia. . This is the oldest book in the York Gate Library (and the RGSSA Library) and was valued by Hince 2009 at $180,000. It is in excellent condition and was rebound in the nineteenth century in a fine gruel binding. Berlinghieri's book was printed by Nicolaus Todescho and published in Florence in 1482, ten years before Columbus sailed from Spain to encounter the Americas. The book’s high significance is also due to being printed only 32 years after the invention of printing by movable type in Europe. The map of the world showing 'Terra incognita' in the south is one of the earliest maps to be printed from a metal engraving. The book is of international significance as one of the incunabula, books that were printed using metal type up to the year 1501, the birth period of printing in Europe. The Berlinghieri is a rare example of migration of such books from Europe – the place of origin – to Australia and it is one of the estimated 2,000 or less that are held in southern hemisphere collections.

The book’s significance is also due to its place in the history of geography, atlases and the concept of Terra Australis. Berlinghieri's book is a paraphrase in Italian verse of Ptolemy's 2nd century Geographia (according to the British Museum, the maps were probably founded upon those ancient maps in the Ptolemy printed by Buckink at Rome in 1478). Ptolemy was one of the great philosophers of the ancient world, who is regarded as the ‘father’ of geography and established a scientific and systematic basis for cartography, such as placing north at the top of the map. Ptolemy developed the hypothesis, that held sway for more than one thousand years, that there was a huge continent in the southern hemisphere to balance the weight of the known land in the northern hemisphere. This hypothetical land was called Terra Australis nondum cognita or Terra Australis incognita. A stultifying factor in the advancement of cartography was the rediscovery of Ptolemy’s work in 1400 and its general distribution throughout Europe during the 15th and 16th centuries’.

There is a certain irony that the invention of movable-type printing aided this distribution, as exemplified in Berlinghieri’s book, which soon followed publication of the first printed edition of Ptolemy’s work (1475). The oldest atlas held in the Australian National Library’s collection is an edition of the Ptolemy atlas printed in 1535, some years after the Berlinghieri edition

The York Gate copy of the Ptolemy atlas of 1535 is described in York Gate AA: Non-Australian.